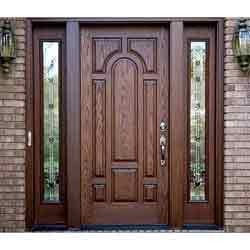 The doors and windows need a great attention. Besides outside settings and interiors too, there are several other aspects, which need consideration while planning and designing, and this is one of them.

There are some points that one should always consider before designing the doors and the windows.

Entrance Door To the House

Many houses may have more than one entrance on the frontage. Some rules however, have to be followed for providing these doors. If there is only one main entrance door to the house then more wealth is expected over other factors. If there are two doors in the entrance then a comfortable life for the inmates can be expected. If there are three doors than it is harmful to the residents. If more than three doors are provided as main entrance than it causes many problems.

If only one entrance is provided to the house, it should be placed in east or north for the best results. Doors in the west and south are not good/allowed, but these directions can be used for a entrance in commercial establishments.

If a house has two doors than they can be in the following combinations:

Four Doors
If the house is aligned to the magnetic orientation than keeping the door in all the 4 directions is very auspicious.

Vastu allows decoration and carving on the main entrance and other doors, but has some rules to be strictly followed for the same:

One should keep in mind that any god images etc. should not be used on the outer side of the door as it may lead to poverty and other problems.

A door is a hinged, sliding or folding barrier of wood, metal, glass for opening and closing an entrance to a building or room. But now the definition for the doors has changed as first impressions are the lasting ones and the front entry makes a statement about the house. It is something that we pass through million times in our lives, from day we enter this world to day we leave, it. The most utilitarian of architectural elements, the DOOR is undoubtedly the most influential. Whether it is for light, warmth, ventilation, access or a view, a well-planned door can have a dramatic impact on your living space.

Door dimensions vary from region to region depending on the context to it's usage. The primary purpose of the door was to defend, today we have a panorama of door designs.

Designers must deliver highly detailed, beautiful and imaginative doors. The responsibility of the designer does not stop at creating a appealing thing, but it must also extend to create a sensory experience from the door knobs to each and element used in there.

We can categorize the doors in seven different categories, each of them is discussed below.

Entry doors: The front door is usually the most eye catching feature of a house. The entrance doors should need to be in relation to the style of their surroundings. Whether viewed from inside or outside, they become an integral part of a home's design. They can vary from modern glass door to gothic style, from multi panelled to arched door.

Glass doors: A glass door design should reflect the sensuous sophistication and detailed elegance. Decorative glass is a very good option to door units. Whether it is stained, beveled, etched, mirrored, painted or sand blasted, they can turn the door into a work of art. The patterned glass panels diffuse the light and fill the room with a bright but less intense glow.

Metal doors: These doors are impressive for their intricate and bold surfaces. They can withstand hard use in both interior and exterior application. Copper, bronze, brass and pewter are the metals finishes for the door.

Carved doors: In classically designer houses, the door is treated as a showpiece, thus carved decorations are seen here. With these doors, elegance and permanence are a reality, not just a façade. These highly ornamented carved wooden panels are originally intended for a grand house.

Paneled doors: These doors can be elaborately molded and exuberantly carved, painted and glided. These doors cope well with most weather conditions and need virtually no maintenance. In these doors, a distinct impact is created through fine joinery and sensitive use of material and design.

French doors: French or sliding doors help link living space and garden while doubling as view walls. A sense of accessibility is always achieved through these doors.

Sun Shades The slopes of all sunshades constructed above doors and windows should be towards the north-east, so that the rain water must flow from south-west to north-east.