The origin of vaastushastra may have taken place well over thousands of years ago. The learned men of those days may not have lived in houses themselves but they most definately dedicated their lives to the developement of the science "vaastushastra" or "vaastu", as it is popularly known today. 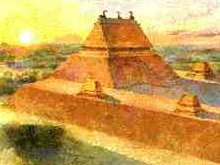 The principles of the science laid down during those days were based purely on the effect of sunrays during different times of the day. The observations and corrections made were noted and concluded only after indepth screening of the situation.

Vastu is a part of Vedas, which are believed to be four to five thousand years old. Through penance and meditation yogis of that period acquired answers believed to have come from the cosmic mind itself to their questions. Hence Vedas are heeded with divine knowledge. The art of Vastu originates in the Stapatya Veda, a part of the Atharva Veda.

It used to be a purely technical subject and it was only confined to architects (Sthapatis) and handed over to their heirs. The principles of construction, architecture, sculpture etc., as enunciated in the epics and treatise on temple architecture, have been incorporated in the science of vastu. Its description is there in epics like Mataysya Purana, Skanda Purana, Agni Purana, Garuda Purana, and Vishnu Purana. There are some other ancient shastras that pass over the knowledge of vastu shastra to next generation, like Vishvakarma Prakash, Samraangan Sutradhar, Kashyap Shilpshastra, Vrihad Sanhita, and Praman Manjaree.

Since the science goes far back to the times of Lord Rama and Lord Krishna there are many interesting mythological stories concering the origin of Vaastupurush (the deity).

In the Mahabharata it is said a number of houses were built for the kings who were invited to the city Indraprastha for the Rajasuya Yagna of King Yuddhistira. Sage Vyasa says that these houses were as high as the peaks of Kailasa mountains, perhaps meaning that they stood tall and majestic. The houses were free from obstructions, had compounds with high walls and their doors were of uniform height and inlaid with numerous metal ornaments. It is said that the site plan of Ayodhya, the city of Lord Rama was similar to the plan found in the great architectural text Manasara. References are also to be found in Buddhist literature, of buildings constructed on the basis of Vastu. They contain references to individual buildings. Lord Buddha is said to have delivered discourses on architecture and even told his disciples that supervising the construction of a building was one of the duties of the order. Mention is made of monasteries (Viharas) or temples, buildings which are partly residential and partly religious (Ardhayogas), residential storeyed buildings (Prasadas), multi-storeyed buildings (harmyas) and Guhas or residential buildings for middle class people.

The Vastu, with word meaning 'dwelling', is believed to be the residing places of god and man. According to its modern meaning it covers all buildings irrespective of their use like residences, industries, business establishments, lodges, hotels etc. It is based on the five basic and essential elements, such as Vayu (air), Agni (fire), Jal (water), Bhumi (earth) and Aakasha (space), which are known as Panchabhutas. Everything on earth is built from these elements.

Lord Shiva had killed a devil named Andhak after a long war which had continued for years. A spirit originated out of the perspiration of Lord Shiva and consumed all the blood from the body of the devil. His hunger was still not satisfied. He then undertook penance. Lord Shiva was impressed and highly satisfied by his penance and offered him a boon. The spirit then went wild and started eating men and animals. This terrified even the Gods in heaven. 81 Gods including Lord Bramha laid the spirit face down and they then sat on different parts of its body. When the spirit asked for forgiveness Lord Brahma offered him a boon: "After building any structure, the people who offer you prayers and worship you as vaastudevta will be blessed with pleasures and prosperity. However only those people, who do not offer you prayers shall be at your mercy and you may trouble them in any way".

There is a possibility that these stories were added in the olden scripts only to scare people and make them conscious about the subject.

The science of vaastushastra is however no mythological story and has stood the test of time for thousands of years.

The science of Vastu is considered an integral part of the Indian architecture. According to modern historians Ferguson, Havell and Cunningham, this science developed during the period of 6000 BC and 3000 BC. Being a technical subject, it was confined only to the architects (Sthapathis) and handed over verbally or in the form of hand-written monographs. The principles of construction, architecture and sculpture, as enunciated in the treatises on temple architecture, have been incorporated in the science of Vaastu.

From ancient literature, we gather that Vaastu was treated as the science of construction of temples and royal palaces.

The first official treatise on Vaastu, the Kasyapa Silpa, has been attributed to Sage Kasyapa.

In the treatise Agama Shastra, which explains the science of temples, Vaastu is considered as the basis for any type of construction. Excavations at Harappa and Mohenjodaro also indicate the influence of Vaastu on the Indus Valley Civilization.

India is the mother of vastu as our saints formulate principles of vastu here. Vastu was written down thousands of years ago where our sages kept in mind the effect of energies and sunlight and balance all the five elements in a manner to have the maximum benefit out of it.

Vastu Shilpa Shastra, the ancient mystic science and the art of designing and constructing buildings finds its origin in Stapatya Veda, which in turns is a part of Atharvana Veda, one of the four Vedas. According to modern historians Ferguson, Havell and Cunningham, this science developed during the period of 6000 BC and 3000 BC.

These principles, called Vastu Shastra, were evolved over thousands of years out of experience and foresight of ancient Sages of India and are very valuable for the well being of mankind. According to Shastras, if we worship, revere and respect the lords of these eight directions, they will shower on us their blessings and benefits. Our saints have searched vastu shastra; we are only Researching it.

Ayadi calculation is one of the most important part in Sthapatya Veda, Ayadi Calculation is also called as Ayadi Shadvarga or the Building formulae. The Scriptures as well as the ancient architects (Sthapatis) considered the dwellings as a living organism, irrespective of temple, residential homes, palaces etc.

The knowledge of Ayadi is used by the designer to determine the effects of the physical structure on the individual. The homeowner is born under the influence of a particular birth star. The building is considered to be a living being and also has a birth star. Ayadi calculations attempt to harmonize the energies created by the influence of the birth star of the person and that of the building. When these energies are harmonized the dweller experiences material prosperity and spiritual well being. Ayadi is also said to be able to affect the fate of the individual.

Vastu Shastra is the traditional way of enhancing your luck by integrating architecture with Nature. Vastu is an important part as it attracts and allows positive energy to freely flow through the place. Aaya Prakaran is one of the most important parts of Vastu Shastra. The word Aaya means income. When you take up any land for construction “Aaya Prakaran” must be followed to get benefits and to achieve good results.

In Vastu Shastra, the formula of Aaya and Vargas need to be followed for scientific and accurate construction. There are Nine Vargas also known as Navavargas and the importance of each Varga is stated in the classical references such as Samarangana, Suthradhara, Mayamata, Aparajita Prucha, Kalarnrutha, Viswakarma Prakasika, Vasthusara, etc.

There are also a variety of opinions and thus some classical texts state only about 6 Vargas being Aaya, Dhana, Vyaya, Tidhi, Vara, Nakshatra.

There are eight types of Aaya’s representing each direction, namely:

The Aayas are best suited for the position or direction of which they are native off. The Aaya which is opposite to the native direction is always of the enemy character for the Native. The construction of the house/office/temple can be done in any of the four directions i.e. North, East, South, West but not in any corner.

There are different effects of Aayas on different areas of life. Some of these effects are:

Most of these Aayas have Masculine features, Bullock like features, elevated neck, hands which match human hands, features like bird feet and lion neck are also present, which are favourably considered.

The Fifth Varga of the Native Varga should be avoided as it is considered as of enmity nature and does no good to Native Varga. The best Varga is always the Swa Varga (which means the Varga of its own) as it is favourable and always preferred.

The effects of different Vargas from the Native Vargas are:

The Mars and Sun of a house will result in threat from fire and the other houses will be favourable.

Yogas : The bad Yogas of the 27 Yogas present will affect the owner with loss of wealth and gains.

The remainder gives the following results as per the calculations :

The first step for calculation of Nava Vargas is to know about the “Kshetripada”. This means the area for construction and is calculated by multiplying the length and breadth of the same. By multiplying and then dividing the Kshetripada, we get the Nava Vargas.

The texts of Viswakarma Prakasika state the method in the following way:

The Kalamruta Method is as follows:

The Aaya (Income) should always be more than Vyaya (Expenditure). If Vyaya is more than Aaya, then the residents will always have financial problems.

The Yoni Should always have a reminder in odd numbers i.e 1, 3, 5, 7. Refer the below Yoni table for benefits.

Yoni calculation is an important aspect in Ayadi calculation, based on the Yoni the direction of the plot & Building is decided. Dhwaja Yoni is considered the best Yoni in Sthapatya Veda. Another important point to be observed is that all the auspicious Yonis are in line with Cardinal direction of North, South, East & West. The Plot or the building with diagonal directions  & entrance from North-East, South-East, South-West, North-West is inauspicious & hence rejected.

There are 27 Nakshatras in Vedic astrology, the nakshatras with 2, 4, 6, 8, 9 as remainders are auspicious.

The above calculations are performed by an expert Vaastu Sthapathis, before one starts construction of any form of the building, it is recommended that You consult an expert to attain both spiritual & material benefits.