A building, whether it be a residential house or a industrial concern, it should be constructed obeying all the principles and rules given in Vastu Shastra. Five rules have been incorporated in them on the basis of the great Indian saints. By establishing them in proper place as directed by Vaastu Shastra accidents and loss of property and persons can be avoided. It is the moral duty of human beings to work cautiously and carefully and mould the actions and behaviour in accordance with the set norms so that there may not arise any sort of difficulty in his works or constructions ever in future; and he may lead a peaceful and happy life following the customs and traditions of the society and norms set in the culture. Enjoying the bliss of healthy long life with family, he may find out the ways and means of getting rid of all troubles and losses. This is possible only on the basis of knowledge and knowledge requires experience. Too incorporate the deeds and experiences of the forefathers or of our own in current situations in life, so as to enjoy the worldly pleasures is what we call experience. Happiness can be enjoyed for whole of the life. 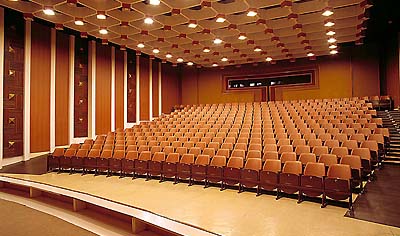 Therefore, no worldly troubles and disturbances come in way of the construction of any kind made in conformity with the principles and norms of Vaastu Shastra. Diving troubles can also be avoided or removed by performing certain rituals according to one's own belief and religion; and mental peace and self satisfaction can be achieved.

Just as we think of the taste, presence of any worm/germ etc. and benefit or otherwise of eating a plum before we eat it, in the same manner we should be careful and think twice before starting any construction work.

The progress of any construction work is hindered or slowed down only if it is not in accordance with the procedure given in Shastras, where the good or evil effects of all the steps right from selection of site to residing in the house constructed have been considered.

Generally it is seen that many cinema halls have been erected without caring much of the Vaastu-Gyan. Such halls remain incomplete and inspite of several efforts it can not be completed successful; even if these are completed some how, they do not run profitabily. Many Cinema halls have either been closed or these are being converted into a commercial complex or residential flats. If we go deep into the cause behind it, we find either the site was not selected according to the norms or foundation or was not laid in auspicious moment, or there had been some default as per Vaastu-principles in the construction etc. 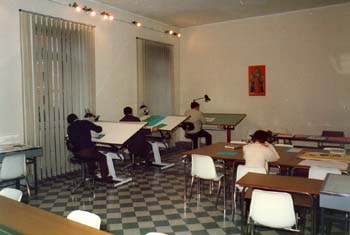 (1) Before constructing the cinema hall or studio, the land site should be properly selected according to Vastu principles and confirmed that the land is 'live'.

(2) Some learned astrologer should be consulted to know about the favourability of stars in the business and in case of any adversity, efforts to avoid the difficulties should be done under his guidance.

(3) The land should be sloping towards the north-east direction.

(4) Building of the cinema hall should be constructed keeping it elevated and heavy on the west and south.

(5) Screen and stage should be in the north or east and the balcony should be constructed in the west-south.

(6) Viewers should face towards east or north while seeing a film.

(7) Generally it has been found that the cinema halls which had screen in the west or south (so that the viewers had to face towards west or south ) have either been closed down or are have been running in heavy losses. The oldest and famous Ram Prakash Talkies in Jaipur, Amber Talkies, Shalimar Talkies etc. are examples of the same.

(8) The machine room to project the film on the screen should be built in the south or west direction.

(9) Generator and electric power etc. should be installed in the south-east corner where only these will be auspicious.

(10) Toilets for the public should be constructed in the south near the south-west (Nairutya) corner or in the west near north-west corner, such that people face towards north or south while using the toilet.

(12) Canteen and restaurant should be allotted a place in the east near the south-east (agneya) corner. In alternative situation it can be near the north-west corner in the north.

(13) Car parking, cycle stand, etc. should be there in the south-west portion.

(14) Enough open space should be kept all around the cinema hall. Lawn and park should be placed in the south west corner of the roof.

(15) Over head water tanks should be placed in the south west corner of the roof.

(16) The north-west corner should be kept low and light; it should always be kept neat and clean. Arrangement should be made in this corner for worship (Puja)

(18) Generally Friday is considered to be the auspicious day for release of a film of starting the shooting of a film. In astrology Venus (Shukra) is supposed to be the god of worldly knowledge, pleasures and art. If favour of Shukra grah (Planet Venus) is gained by special efforts, it would be much fruitful in the matters relating to music, drawing, dance, poetry and drama, writing, wearing new clothes, decoration, film shooting, get-together, etc.

(19) There should not be any kind of pit or low area in the vicinity of the cinema hall in south or west direction.

(20) A pit or low in the north or east is auspicious, water tank, bore well, constructed below the floor level of the hall in north-east direction for drinking water is auspicious and beneficial. Dirty waste water should be drained out on the south-west side. Rain water should flow and out towards the north-west side.

(21) Slope of the cinema hall should be toward the north-east. Roof of the hall should also be sloping in east or north directions.

(22) Ticket (Booking) window should be in east-north directions and viewers should also sit facing towards east or north.

(23) Office of  the accountant and the engineer should be in south-east portion.

These should provide proper entertainment and should be free from any danger risk. If the rules of the vastu are violated, there will be fewer visitors and it can be open to some accident risk.

We have to take care of the following points while studying about the vastu of the theatres.