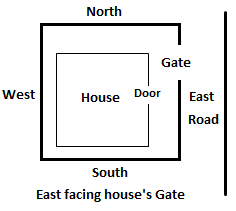 A north-east facing plot is best for all type of constructions, whether a house or a business establishment. However, due care must be taken while deciding the construction of the interiors, i.e. rooms and placement of furniture etc. These rules differ with type of business and with establishments nearby.

The description of all these rules is as under:

Road
The road on the east side should be lower than the plot and the slope while constructing the building should be from south towards the east direction i.e. from the rear of the house towards the front.

Open Space
Open space in the front of the house should be more in comparison to the back side i.e. more space in the north-east than in the south-west.

Gate
The main entrance gate to the house should in the northern half of the front. It brings peace and prosperity to the inmates. The gate in design should not be in arc shape i.e. higher in the middle in comparison to the ends/sides.

Levels
North - East of the plot should be the lower in construction in comparison to the south-west. This rule applies to the floor levels as well as the top roof/terrace levels of the house.

Construction
South-West corner of the house (where south and west walls meet) should never be left open and must be constructed. A servant room or garage, however is better to be in this portion. If a garage is constructed it shouldn't touch the main building of the house i.e. kitchen bedrooms etc., if possible.

Staircase
The stairs should be constructed in the south, west, or south-west portion of the house, and should always be clockwise if turning.

Septic Tank
Septic tank can be constructed in the mid-north or mid east.

Landscaping
No tall trees should be planted in the north-east, however south-west can be used for plating trees. A lawn in the north east is beneficial. If you like to keep a fountain, it can be installed in the north.

Overhead Tank
Overhead tank should be in the south portion of the house, and must be raised a few inches from the roof level.